You need yourself. Providing mental health services to refugees is life-saving. 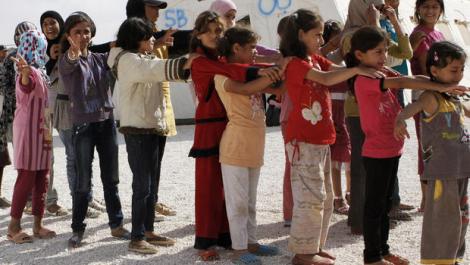 Not only house and food is needed. You also need yourself, yourself in a good state in order to start a new life.

says Melanie Megevand, the International Rescue Committee’s (IRC) women’s protection and empowerment co-ordinator in Jordan. She argues that these services should be treated as a basic need – as important as toilets and tents – from the onset of a crisis.

While tangible items are important, they do little to help repair the «social fabric» that has been torn apart. «What support from the IRC and other organisations can provide is full healing, so they can rebuild and take back ownership of their lives. If someone is a victim of violence, the capacity to make decisions and own your life is taken away from you,» says Megevand.

At the CVT centre, people often arrive with no thoughts of the future. But, says Carter, by the time they finish their therapy, things have usually changed. «Syrian refugees are very resilient. They have gone through so much … but they’ve managed to survive, which is in itself a great thing,» she says. «They often come out [of therapy] almost different people, who feel they can manage, and look to the future.»

Melanie Megavand explains in an interview that many cases of sexual violence, are being repported by syrian female and male refugees that run away from their country…

«What we do know from the three assessments we’ve completed is that reports of sexual violence — and of rape in particular — have been frequently reported by women and girls, and even by men within Syrian households. It has been mentioned as one of the main reasons why families have been fleeing Syria.

(…)What is really needed in the type of emergency situation we’re seeing is a physical space where women and girls can safely and freely meet.(…) For instance, here in Jordan at the Zaatari tent camp, Syrian women say they don’t have a private place where they can cry. And these are things that women must have. They need to have space where they can feel comfortable to be able to release their emotions and to be able to begin to address them.

Is there enough of a focus on gender-based violence in refugee crises?

A.  People don’t realize that this is lifesaving. People typically think what is most needed at the onset of a catastrophe is shelter, food and water. But gender based violence prevents women and girls from accessing these services. It’s an essential need that must be provided from the start and throughout, because changing social norms and reducing levels of gender based violence is a long term project, but it’s not something that you can leave until later. It needs to be addressed from the onset.